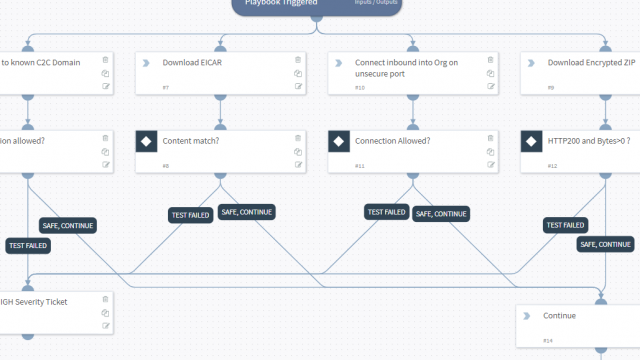 When I was a SOC team leader (before SOAR existed) I tried to build automated processes to confirm technology and process worked as excpected. Even though I suffered from scalability, my aim was to test:

(I once saw “allow encrypted PDF” at the top of a proxy config. #Fail)

Imagine a playbook that could:

We could run this playbook every 60 minutes, and any test that “fails” can create a Critical Severity incident for the team to investigate WHY it was successful.

Referencing the “Connect to known C2C” validation above as an example, this should be blocked, but even when it is blocked we can test more:

Can we check this automaticaly, and check whether the alert creation is happening quick enough?

This kind of playbook can be left running for weeks, and you only get involved if an alert fails to be created. That’s a lot of peace of mind for a very small amount of effort.

The list of actual test is endless, but if I still ran a SOC here is a simple list I would want to create for endless validation:

What else could you test?