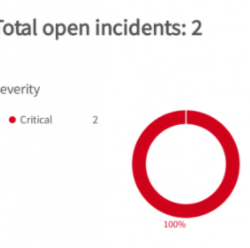 When does a use case be classified as something other than a use case?

When posing the question to customers I engage with, the responses are fairly typical from a small subset of common challenges focused around security incident management. Some typical examples as follows:

And so on. It’s hard sometimes not to feel like I am a terrible game show host seeking audience participation but I would much rather this than hear crickets!

I am nothing if not prepared for such engagements and having first hand experience helps when focusing attention to the matters that would bring MOST value to the SOC and one such example is common but rarely thought of in the realms of incident handling.

In an industry plagued with three-letter acronyms for stuff this one appears to have slipped through the net, for now at least. I have heard it described as “Major Incident Management” (MIM) or “Critical Incident Handling” (CIH). Neither the acronym nor naming convention matters in truth, yet this is one challenge that can have serious repercussions to a business not automated. Pertaining specifically to MIM/ CIH, the SOCs goal is to:

Ensure a consistent methodology is applied during a major/ critical incident and regular communications occur during the investigation of said incident.

If you’ve ever had to firefight (metaphorically or other) then you will know that communication is often automatically placed to the bottom of the list as the priority is to fight fire (obviously). A SOC analyst has to diagnose and mitigate a threat as quickly as possible and naturally all attention is on performing this duty. Updating management slows the response and detracts from the task at hand so quite simply automation is the only option.

How about this: a playbook that runs on a schedule and sends an email with a predefined format to a distribution list in the event of an incident that exists that matches “critical”. That would solve the problem of communication whilst ensuring that the SOC can do their thing and put the fire out as quickly as possible! Well look no further as we have a playbook for that:

The playbook logic is very simple: If there is no critical incident, then no email is sent; if there is a critical incident then the playbook generates the report at a schedule defined by the business (in my case the requirement was to update management at least every thirty minutes but this does vary). Here’s the filter on the search incident task:

And the mail received, with an attachment and a small amount of text with the incident numbers (customisable of course):

The attachment (funnily enough, also easily customised) is designed for management’s perusal. A separate email with much more detail can also be sent to the SOC manager… but this is probably unnecessary as they should be using the default XSOAR dashboard that shows them this 🙂

I have no doubt that every SOC has this need but maybe they just don’t know it yet?

My closing advice: always think broader than the two or three incidents you work on regularly or the most annoying cases you work on within the SOC. The business should know the value the SOC brings by thwarting attacks in a timely manner and easily demonstrate your value to the organisation.

Awesome post Patrick I look forward to the your next one 🙂

That is to say that… a saving of 5 minutes, against an action that happens 5 times a day… you’re allowed to spend 4 weeks making it and still be in the green.

I don’t recall ever needing 5-6 days, but even If I had…. that time is justified on a use case that: 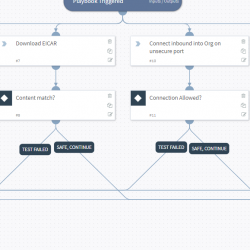 When I was a SOC team leader (before SOAR existed) I tried to build automated processes to confirm technology and process worked as excpected. Even though I suffered from scalability, my aim was to test:

(I once saw “allow encrypted PDF” at the top of a proxy config. #Fail)

Imagine a playbook that could:

We could run this playbook every 60 minutes, and any test that “fails” can create a Critical Severity incident for the team to investigate WHY it was successful.

Referencing the “Connect to known C2C” validation above as an example, this should be blocked, but even when it is blocked we can test more:

Can we check this automaticaly, and check whether the alert creation is happening quick enough?

This kind of playbook can be left running for weeks, and you only get involved if an alert fails to be created. That’s a lot of peace of mind for a very small amount of effort.

The list of actual test is endless, but if I still ran a SOC here is a simple list I would want to create for endless validation:

What else could you test?

I find that the vast majority of vendor integrations and playbooks automations are 90% identical: ingest inbound data (array, object, etc), parse through it whilst validating and extracting, then finally pushing it out.

This means I use the same code aaaaaall the time. So I thought I would make a little cheatsheet for the basics (to prevent me googling the same things over and over). This list will change/grow over time.

Not covered in this cheatsheet:

To keep formatting simple, “<<tab>>” respresents a real Tab in the code 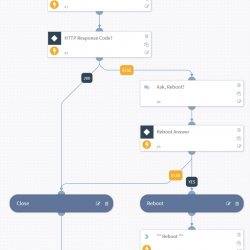 Socops.Rocks is hosted on a WordPress site:

The problem can be described:

SOAR to the rescue! We need:

Job 3 – Build a very simple workflow around the ‘Reboot’ task. If we get a HTTP 200, simply close the ticket, ‘else’ ask the sysadmin whether to issue a reboot.

Job 5 – Enjoy life and at a social distancing BBQ

There are of course many improvements I can make (and I probably will to squeeze a second blog article out of this….)

Without a video it’s hard to show this in action, but I’m happy to say that it works perfectly.

Nice article over at TechRadar
https://www.techradar.com/uk/news/unlocking-the-power-of-soar

Last week I had an intersting chat with a security team:

Coupled with intelligent prioritising this is a great idea

This is great, but I see an improvement. Workloads change very quick, you might be busy right now, but in 1 hour everything gets resolved, then you have no tickets to look at.

I’m an ex-analyst, I know that low quality alerts can contain valuable information, we don’t always have the time, but that ticket still needs enrichment for future analysis if we need to come back to it.

At least using SOAR for automation you ensure that:

A man walks into a bar, ouch

This is a quick ‘joke’, it takes 2 seconds to say, everytime I tell it. I have no concerns giving a SLA for this joke. On the other hand…

Whilst I know *I* can tell this joke in under 5 seconds I’m entirely relying on the person I’m talking to, is it representative to apply a SLA on me?

Compare this to a SOAR playbook: any local task we have control over, but it’s not so simple when we wrap a business process around this:

So how do we apply such SLA to playbooks ?

SLA for an entire Incident

A timer starts with the incident, if the ticket takes longer, we have a SLA breach.

SLA for each individual task

Start a timer for each specific task, if that task takes too long we can either alert, skip the task, or take a different playbook route and escalate the process to the senior team.

That moment when you realise SOAR is just a bunch of building blocks.

I hear this a lot, but it doesn’t matter. If anything, a smaller team has more of a need for SOAR.

A listener writes in asking “How do you thrive, and how do you survive as a team of 1?”

The panel discuss many general points, including:

Whilst the panel lean towards distributing responsibilities and finding allies to do work on your behalf (lucky them), I was just hearing:

Essentially, automate the hell out of it.  If you have 1 or 2 people, surely automation is the only way to scale.

Example:  User submits a request (priority 3?), which goes to the bottom of the priority queue, which takes 2 days to find, and 30 minutes to fix.  That’s a long wait for something simple.  People see the IT team as blockers, not enablers.

Now imagine SOAR performing all those simple/fast requests with a turnaround of 2 minutes.   2 days wait -> 2 mins wait is a 144,000% increase in service you give without any additional head count or training.

Use Cases every sized organisation has to deal with:

This has a few benefits:

That’s just the basics of what SOAR does. Taking that further and using all the functionality of SOAR Case Management here too:

Honestly I could go on lots more on how SOAR in the background supports a smaller team, but I hope this makes the point?